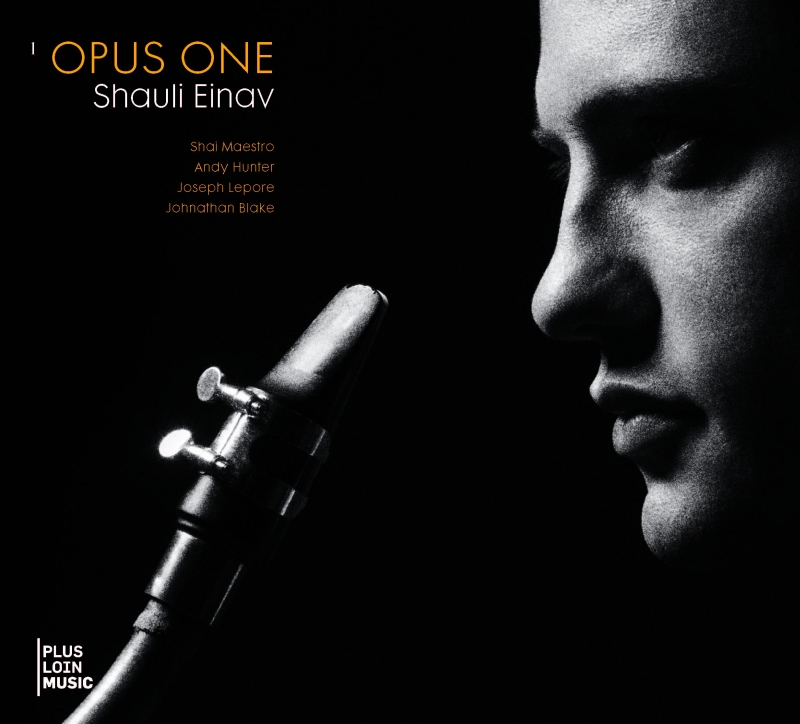 All About Jazz Review by Dave Wayne: Given the sheer number, stylistic variety and extraordinary quality of jazz recordings coming out of Israel these days, it's safe to say that improvised music is alive and well in that embattled country. Even among the rarefied company of Israel's finest young jazz musicians, saxophonist Shauli Einav stands out as a uniquely accomplished and mature talent. So does his debut recording, Opus One. A protégé of the late Arnie Lawrence, Einav has something of Lawrence's keening alto sound and sheer zest for making adventurous-yet-swinging modern jazz. Einav's distinctive sound combines the understated insight of Lee Konitz with the bluesy expressionism of Lawrence, Noah Howard, and Marion Brown. Einav's also got a truly Middle Eastern thing going on in his playing—full of unexpected trills, warbles, and ululations. Yet, he comes across as a dyed-in-the-wool jazzman.

On Opus One, he's also chosen an accomplished band to explore a clutch of his own largely up-tempo compositions. Drummer Johnathan Blake turns in a remarkable performance. Picking up on every nuance of Einav's compositions, his combustible, hyperactive playing would seem overbearing if it wasn't so joyous. Pianist Shai Maestro lives up to his name. While his elegant piano playing is firmly in the classic modern jazz lineage of Chick Corea and McCoy Tyner, he surprises with a stealthy Minomoog solo on "Jerusalem Theme," and a funky, ringing Wurlitzer on "Hayu Leilot." Trombonist Andy Hunter is an excellent frontline partner. Like Einav, he's a lyrical player who doesn't feel the need to wield his acrobatic chops on every solo. He also provides a splash of bluesy grit—on "Shavuot," for example—and provides a bit of contrast to Einav's smoothly polished surfaces. Bassist Joseph Lepore works well with drummer Blake, imparting considerable forward motion to Opus One's many up-tempo and odd- metered passages. As remarkable as the playing is, it's Einav's compositions that carry the day on Opus One. Never neglecting the core values of what makes jazz such an appealing musical proposition in the first place, Einav's pieces also refer to elements of Israeli folk music, funk, and free jazz in various interesting and intelligent ways. Though the high energy levels dominate, the slower, melancholic moods expressed in "Naama" and "New Era Ballad" attest to Einav's ability to do pretty much anything he wants to. Opus One is a beyond impressive debut by an extremely talented young saxophonist. Track Listing: Jerusalem Theme; Kavana; Naama; The Damelin; Hayu Leilot; Interlude; New Era Ballad; Shavuot; Coda. Personnel: Shauli Einav: saxophones; Shai Maestro: piano, keyboards; Andy Hunter: trombone; Joseph Lepore: acoustic bass; Johnathan Blake: drums.